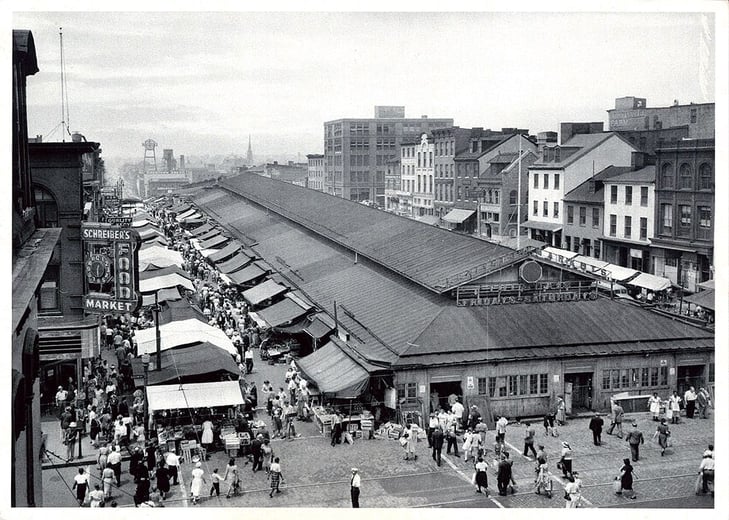 Eric Waskey, patriarch of the Wynston & Co family, grew up as a butcher in the meat business in Baltimore’s Lexington Market, one of the longest-running markets in the world. In 1965 Eric took over his father’s business. In the early 70s, he began phasing himself out of the meat business and working part-time for Lucas Brothers selling advertising specialties. By 1978 Eric founded Forms for Business selling, well, business forms and Premium Jobbers selling branded merchandise. He set up shop in his backyard barn. Now, over 40 years later, Wynston & Co is a thriving, third-generation company that serves several divisions within 700 brands, globally.

What has been the key to Wynston & Co’s long-term success? If you ask Waskey, he will humbly attribute it to a unique culture based on three things: making work fun, earning recommendations, and always being thankful for customers.

Back in the Lexington Market days, Waskey worked long hours. 70-hour workweeks (20 hours on Saturday alone) were the norm. He was brought up that work is fun. “If you’re not working, you’re not having fun,” says Waskey. When he started working for Lucas Brothers (now Staples), Waskey worked tirelessly to make sales. “I developed the ‘20-5-2 formula’ to not become discouraged,” reflects Waskey. “It was like a game. I had to make 20 cold calls to make 5 friends and gain 2 customers.”

The formula’s origins are in Wynston & Co’s first sale. After calling on dozens of companies in Baltimore, Waskey decided to try Butch at J.W. Treuth, where he sourced most of his meat in his previous career. Butch placed a $110 order for pencils. “I still hear that story from time-to-time,” says John Treuth, General Manager of the meat wholesaler. “Eric is a hard-core guy. But he was always fun to work with.” Treuth calls Waskey an inspiration and says his company does their best to do the same. “We have to. There’s too much competition. Eric figured that out decades ago, and Wynston and Co lives by that truth today.” J.W. Treuth was Waskey’s first customer and is still an Wynston & Co customer today.

Another early account, The Gift Shop at Johns Hopkins Hospital, opened up business in other parts of the organization. After initially working with the gift shop, the store manager introduced department heads to Waskey to place orders directly. The various departments would buy items for Nurse’s Day and other occasions as well as other branded goods. “We trust Wynston & Co. They’re not going to give us a line,” says Terry Nelson, Assistant Director of Medical Nursing at the hospital. “They’re a good, ethical company founded on strong principles about how they should treat their customers.”

Always be Thankful for Customers

But, the underlying reason for Wynston & Co’s success, says Waskey, is being thankful for customers. “Customers are your competitor’s best prospects,” notes Waskey. That mindset keeps you humble and gives you an ambitious attitude.

“I’m impressed with the level of integrity at Wynston and Co” says Bill Wommack, General Manager at People’s Supply Company. “For almost three decades, everything they have done for us has been done with excellence.”

“When customers are satisfied, pour on the gratitude,” advises Waskey. “You can never be too thankful. It’s free. Be conscious of it and thankful for it.”

Waskey says he didn’t really have a vision for Wynston & Co. He simply focused on doing whatever it took to help clients build their brand. The company grew. It changed. But one thing has remained the same: a culture based on hard work, earning recommendations and, of course, being genuinely thankful for every customer.

When you spend $1,000 free shipping is automatically applied at checkout.

If by any chance you aren't 100% satisfied with your order, we will offer a refund.

Our store is certified Level 1 PCI DSS compliant, so you don't have to worry about security.